The circumstances that led to this decision from Texas and Oklahoma can be traced back decades.

By Joe Lucia on 08/25/2021:
The story doesn’t begin in this decade. Hell, it doesn’t even begin in the 2000s. You need to go all the way back to the 1970s and a Supreme Court decision that would forever change college football.

In 1977, the College Football Association (CFA) was created. The CFA, to broadly sum it up, was a coalition of several conferences and independent schools with the set goal of negotiating TV rights for all the members outside of the NCAA’s shadow. CFA members included schools from the ACC, Big Eight, Southwest Conference, SEC, and WAC. Notably, two conferences did not join the CFA – the Pac-8 and Big Ten.

Once the CFA got a TV deal done, the NCAA threatened to punish the member schools. That didn’t go over well. Georgia and Oklahoma sued the NCAA, and the Supreme Court ruled in their favor in 1984, deciding that schools and conferences could sell their own TV rights. And while the CFA benefitted from the decision, in a cruel twist of fate, the two conferences that weren’t members arguably benefited more. The Supreme Court’s decision allowed both the Big Ten and Pac-8 to negotiate their own TV deals.

The CFA agreed to a $210 million deal (covering 63 schools!) in January of 1990. Notre Dame bolted the CFA and sold its home games to NBC on a five-year, $38 million deal. And then, the conference realignment dance began. The Big Ten (not a CFA member) added Penn State (a CFA member at the time). Arkansas left the SWC for the SEC. Florida State, Miami, and South Carolina joined the ACC, Big East, and SEC, respectively.

In 1994, the SEC dumped the CFA two years after becoming the first conference to add a championship game. The conference then inked a $95 million deal with CBS, with the Big East following soon after. Then, the hammer blow came – Texas, Texas A&M, Texas Tech, and Baylor decided to leave the Southwest Conference for the Big Eight, starting in mid-1996. The SWC folded, and the Big Eight was rebranded as the Big 12.

However, the Big 12 as we knew it almost never happened. The Pac-10 actually offered memberships to both Colorado and Texas in 1994, but both declined. The Big Eight also almost became the Big 14 following rumored offers to BYU and New Mexico. As we know now, none of that happened, and the Big 12 got a five-year, $60 million TV deal from ABC with another $30 million from ESPN. The CFA was officially dead and buried in mid-1997. After this, the college football world was at peace, and this is probably the time period people talk about when they mention “the way things were” (well, aside from the BCS).

We didn’t know this at the time, but the launch of BTN in 2007 would end up forcing the wheels of realignment into motion once again.
Those wheels began to turn in late 2009, when the Big Ten decided to look into expansion with the goal of increasing BTN’s reach. In June of 2010, the Pac-10 gave the green light to potential expansion. The two conferences struck on back to back days, both going after the Big 12 – Colorado joined the Pac-10, and Nebraska joined the Big Ten. That turned the Pac-10 into the Pac-11, the Big Ten into the…well, Big Ten with 12 teams, and cleaved the Big 12 down to ten.

The future of the Big 12 was then up in the air. Texas, Oklahoma, Oklahoma State, and Texas Tech all received Pac-10 invitations, as did Texas A&M. But Texas pledged it's future to the Big 12, and the rest of the schools fell in line. Part of the deal included a new TV contract with Fox Sports, and eventually, a new TV contract with ESPN. The Pac-10 eventually expanded to 12 with the addition of Utah from the Mountain West, giving them the ability to host a conference championship game.

Despite the new TV deals, the round of realignment hurt the Big 12. With the conference being cut down to ten teams, it couldn’t host a conference championship game anymore, while both the Big Ten and Pac-12 could (along with the ACC and SEC).

Whatever ends up happening, the Big 12 cannot do what it as a conference has largely done over the last 25 years – that is, stand idly by while the other conferences rush past. That’s what they did when Nebraska and Colorado left. That’s what they did when the four other power conferences launched their own TV networks. The only time the conference ever really fired back at its competitors was when Missouri and Texas A&M jumped to the SEC and the Big 12 added TCU and West Virginia. Today, the conference finds itself in a similar, but more dire, situation. It cannot be passed by, especially in the face of this new ACC/Big 10/Pac-12 alliance, once again. If so, it’ll be more like a mid major with a famous name – kind of like the Big East when it was going through its death throes a year ago. 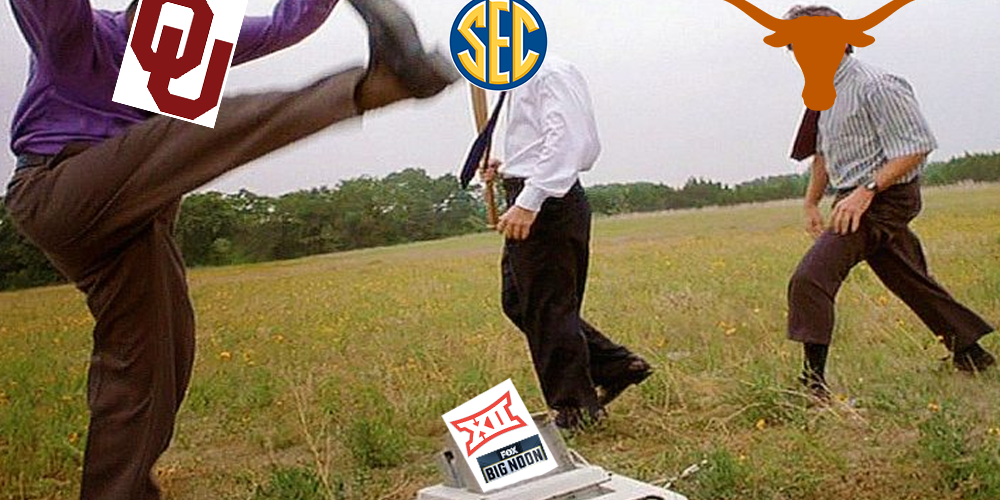 How the Big 12 wilted and lost Texas and Oklahoma

Texas and Oklahoma leaving the Big 12 is the latest chapter in a long story of TV rights, conference championship games, and realignment.
awfulannouncing.com
You must log in or register to reply here.

Article of Big 12 going beyond 12 after Texas, Oklahoma leave is nonsene

So if the Big Ten is not done expanding, how does this impact future of the Big 12?