This is just rich...Could leftists get anymore hypocritical? They say Elon is a danger to free speech, though Mr. Musk is wanting to stop the silencing of free speech. Leftists are crying for more regualtion of speech! Do they even hear what they're saying? How do the sheep hear this garbage and believe it with nary a flinch?

LINK: As Elon Musk attempts to purchase Twitter, many journalists and political commentators have viewed the Tesla CEO's plans to take over the social media giant as detrimental, and have slammed the idea of billionaire ownership, yet several liberal media organizations are themselves owned by billionaires.

Musk revealed that he purchased a 9.2% stake in Twitter earlier in April and has since offered to buy the remaining shares of the social media company for $43 billion. He also declined to sit on the board of directors prior to offering to buy the company and take it private.

Many media figures have criticized Musk's moves as that of another ultra-wealthy figure with too much power and harmful to democracy and free speech.

Supporters of Musk and critics of the media pushed back on this narrative, highlighting several liberal media organizations that are owned by billionaires but without the public pushback.

Amazon founder and billionaire Jeff Bezos purchased the Washington Post in 2016 for $250 million.

Some of the paper's columnists have vocally opposed Musk's efforts. The left-leaning media outlet published a column from former CEO of Reddit Ellen K. Pao headlined, "Elon Musk’s vision of ‘free speech’ will be bad for Twitter."

"Musk’s appointment to Twitter’s board shows that we need regulation of social-media platforms to prevent rich people from controlling our channels of communication. For starters, we need consistent definitions of harassment and of content that violates personal privacy," Pao wrote.

Musk was quick to laugh about the column on Twitter as Bezos, a billionaire, owns the paper.

Columnist Max Boot said Musk was the "last person" who should be taking the reins of Twitter.

Another liberal columnist, Eugene Robinson, said that Musk's takeover might allow for people to leave the social media site. "It just might be the push the rest of us need to close the app and get back to our real lives," he said.

The Post's editorial board also decried Musk's efforts, writing scathingly Sunday about his "his endless provocations and billionaire bluster."

Laurene Powell Jobs, the widow of Steve Jobs, became the majority owner of The Atlantic in 2017. Prior to the 2016 election, The Atlantic endorsed Democrat Hilliary Clinton over Republican Donald Trump for whom they called "the most ostentatiously unqualified major-party candidate in the 227-year history of the American presidency."

Powell Jobs co-founded the Emerson Collective, a for-profit corporation that focuses on immigration, education and the environment. She is an outspoken liberal who donated $713,400 to President Biden's 2020 campaign, according to Forbes. Prior to supporting Pedo-Joe, Powell backed Vice President Commie La Harris during the Democratic primary.

Steve Jobs passed away in 2011. Powell Jobs also owns a stake in Axios, which published a piece last week saying Musk was "behaving like a supervillian."

"Twitter is where journalists congregate and do a lot of their work, and they really don't want to be working in Elon Musk's private playpen," Axios reporter Felix Salmon wrote.

One Atlantic writer, Ian Bogost, made his feelings plain about Musk when he called him a "billionaire bulls----er" and bully who was an "unusual purveyor of infantile jackassery, whose unfathomable wealth makes it possible, and even likely, that he’ll carry out even the most ridiculous plan."

Marc Beinoff, the billionaire CEO of Salesforce, and his wife Lynne, purchased TIME in 2018 for $190 million.

Throughout the Trump administration, TIME was hailed for its controversial photos showing a chaotic scandal-plagued White House, often depicting President Trump in an unflattering manner. Their covers often insinuated Trump was controlled by Russian President Vladimir Putin. This differs from their recent cover that depicted Pedo-Joe in a positive light regarding Russia; several months prior to Russia's invasion into Ukraine, Pedo-Joe met with Putin in which TIME's cover illustration featured the pedophile in his signature aviator shades with the headline, "Taking on Putin."

Like Jobs, Beinoff was a supporter and big-money donor of Harris early in the Democratic primary. Beinoff is vocal in his support for Democrats and has used his company to protest Republicans. In 2015, Beinoff announced Salesforce would cancel any company travel to Indiana over opposition to their religious freedom bill. Beinoff claimed the bill was discriminatory towards the LGBT community. After Texas passed an anti-abortion bill, Beinoff said his company would pay for any employees in the state to relocate.

Musk was TIME's 2021 Person of the Year and most of its coverage of his efforts has been straight news, but not everyone involved with the left-leaning magazine is thrilled.

TIME editor at large and MSNBC analyst Anand Giridharadas tweeted that the Tesla CEO was the reason to "abolish billionaires" and has tweeted several times critically about his takeover effort.

"I’m just going to say that I wrote a whole book trying to explain the specific moves made by people like Elon Musk to parlay business riches into political power, reputational Febreze, and discourse rigging, and those moves still need more scrutiny," he wrote Thursday.

"Perhaps some equity partner will take a gamble on the possibility that, at a private Twitter, Musk will be in charge of memes and trolling, and his partner will be in charge of, like, finances and strategy. Or perhaps he could get a league of libertarian billionaires together to buy Twitter as their collective toy," groused columnist Matt Levine.

Another Bloomberg piece by Tim O'Brien was less concerned with his ultrawealth but called him "bad news" for free speech.

The paper published a news article headlined, "Elon Musk’s paradoxical vision of running Twitter: Less democracy, more freedom," where it quoted one academic who bristled at the idea of a "powerful billionaire" running the outlet.

"The potential hostile takeover of this essential infrastructure by one person, who happens to be a powerful billionaire, is very troubling for democratic society, for society writ large," said University of Pennsylvania Victor Pickard. "Clearly his version of free speech is the bosses’ free speech."

A column by Mary McNamara declared Musk wasn't social media's biggest problem but did write unflatteringly about his immense wealth and called him a "pandemic profiteer" who has used Twitter "to lie about COVID-19, attack critics and get in trouble with the Securities and Exchange Commission."
Reactions: roadtrasheer

If it were not for hypocrisy the left would have nothing to say.
Reactions: lenny4wvu, roadtrasheer and 30CAT
T

They know exactly what they’re doing and saying. They’re hoping you (The American people) do not know.
Reactions: lenny4wvu and roadtrasheer

dave said:
If it were not for hypocrisy the left would have nothing to say.
Click to expand...

if it weren’t for double-standards the left would have no-standards.
Reactions: dave, lenny4wvu and roadtrasheer
R

ThePunish-EER said:
They know exactly what they’re doing and saying. They’re hoping you (The American people) do not know.
Click to expand...

They are counting on people like moe watching CNN
Reactions: ThePunish-EER

Christian96 said:
if it weren’t for double-standards the left would have no-standards.
Click to expand...

That is a lot better than the one I had.
M

dave said:
If it were not for hypocrisy the left would have nothing to say.
Click to expand...

MountaineerWV said:
Hypocrisy is on BOTH sides.....and strong.
Click to expand...

Congratulations? It's good to see you have graduated to observant but this thread is about liberal media outlets trying to bash Musk

Does this surprise you ?

What if we find out Twatter is run by the US govt ?
Reactions: ThePunish-EER

WVU82 said:
Does this surprise you ?

What if we find out Twatter is run by the US govt ?
Click to expand...

If that is true we won't ever find that out.
Reactions: ThePunish-EER 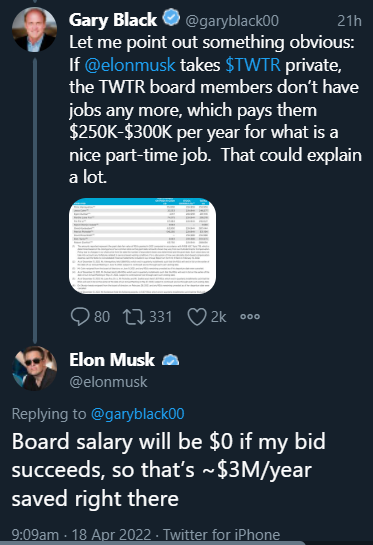 Man I doubt those board members gonna use their 77 shares to vote for Musk.
T

WVU82 said:
Does this surprise you ?

What if we find out Twatter is run by the US govt ?
Click to expand...

dave said:
If that is true we won't ever find that out.
Click to expand...

And you guys have just figured it out. Look up Vanguard and Black Rock. It will all make sense
M

dave said:
Congratulations? It's good to see you have graduated to observant but this thread is about liberal media outlets trying to bash Musk
Click to expand...

I was replying to your response, not the thread topic.

ThePunish-EER said:
And you guys have just figured it out. Look up Vanguard and Black Rock. It will all make sense
Click to expand...

Vanguard is a retirement fund. They made a good investment. They will gladly take Musks offer. They have no choice based on their fundholder agreements.
Reactions: roadtrasheer

MountaineerWV said:
I was replying to your response, not the thread topic.
Click to expand...

I know but stating the obvious. It's irrelevant since it is wealthy liberals in the media telling everyone wealthy libratarians owning media is bad for America.

Vanguard is one of the largest private shareholders in Tesla.

dave said:
Vanguard is one of the largest private shareholders in Tesla.
Click to expand...

I don’t think Jack has any love for his board. I think the mainstream media is about to lose Twitter.

DvlDog4WVU said:
I don’t think Jack has any love for his board. I think the mainstream media is about to lose Twitter.
Click to expand...

That would be my guess too. Jack stands to make a couple billion
You must log in or register to reply here.

We knew it was coming...