Leftists were quick to call parents domestic terrorists and wanted them arrested for speaking up for our children...and it was lawful what those parents were doing. Bleaters are protesting at our justices' private home, which is against the law and leftists ignore them and actually encourage them.

It is hard to believe that only a month and a half has passed since the leak of Justice Samuel Alito’s draft opinion for the Supreme Court in Dobbs v. Jackson Women’s Health Organization overturning Roe v. Wade. With all the threats to Supreme Court justices, crisis pregnancy centers, and churches packed into the ensuing weeks, it feels like the operation of a years-long campaign of siege and bombardment by pro-Choice radicals who have gone largely unleashed.

Just days after the leak, the dark-money group "Ruth Sent Us" posted a map of the six Republican-appointed justices’ homes and offered to pay people to protest there. They urged protesters, "Stand at or in a local Catholic Church" on Mother’s Day and joined a broader, week-long "Mother’s Day Strike" with the stated mission: "Break the economy. By abstaining from work, shopping, entertaining; and on the home front, running a household that would fall apart without your care."

Another group, ShutDownDC, which conducts blockades of roads for a variety of left-wing causes, rallied their followers to the targeted justices’ homes as well as a blockade of the streets around the Court, with a "jail support liaison" on hand "who can meet arrested folks" upon their release. The Supreme Court Building now has eight-foot wire fencing around it for the first time in its history.

The demonstrations at the targeted justices’ private residences were inherently threatening, an attempt to pressure them into a judicial ruling that also happens to be illegal under 18 U.S.C. § 1507. But anyone expecting Attorney General Merrick Garland’s Justice Department to enforce the law would be mistaken. Contrast that with Garland’s focus on treating parents who are concerned about their children’s education like potential terrorists.

Perhaps this reflects that the White House has tacitly endorsed the protests. When asked about taking demonstrations to the homes of the justices and their families, White House press secretary Peppermint Patty notoriously refused to object to it, let alone acknowledge its illegality. Peppermint Patty had once worked for the far-left dark-money group Demand Justice, which applauded the leak of the Dobbs opinion draft in the first place.

House Speaker Nancy Pukeosi cheered on the protests, proclaiming that "we have been moved by how so many have channeled their righteous anger into meaningful action: planning to march and mobilize to make their voices heard."

Senate Majority Leader Chuck Schumer stated that he was comfortable with protests at the justices’ homes as long as they were peaceful.

He added, "The American way to peacefully protest is OK," and then joked as a call came to his cell phone from his wife, "Maybe there’s a protest outside." Schumer might have better appreciated the problem if he were sitting on the bench making judicial decisions instead of occupying elective office.

Who can be surprised that the protests against the justices have escalated? Ruth Sent Us targeted Justice Amy Coney Barrett’s church along with the school attended by her children.

The justices apparently now need armed guards just to go to church on Sunday. And on June 8, a man armed with weapons and burglary tools was arrested near the home of Justice Brett Kavanaugh and charged with attempted murder.

That evening, Ruth Sent Us still went ahead with its protest at the justice’s home. Protests at the justices’ homes continue on an almost nightly basis.

A number of those attacks appear linked to an extremist group called "Jane’s Revenge," which has declared "open season" on pro-life pregnancy centers that refuse to shut down. Not only are such acts breaches of state laws against arson and other destruction of property. They also violate the federal Freedom of Access to Clinic Entrances (FACE) Act, which covers facilities that provide reproductive health services as well as places of worship.

Sadly, we cannot expect much from this Justice Department, with a Civil Rights Division overseen by Kristen Clarke. Clarke has not hesitated to charge people with blocking the entrance of an abortion clinic. What about outright destruction of crisis pregnancy centers? Clarke has a history of calling such facilities "harmful" and "predatory" and using the hashtag "ExposeFakeClinics."

The Justice Department’s failure to act now may incur the gravest consequences. There is no reason to believe the violence is over. Jane’s Revenge has announced a "Night of Rage," telling people to go out at 8 p.m. on the day the Dobbs decision comes out and to express their fury "physically."

If the last month and a half’s insanity and rank criminality feels like a years-long phenomenon, that is perhaps because in many ways it is. As I recently wrote here, unprecedented political attacks on the Court from the pro-Roe left go back 35 years, to the Robert Bork nomination.

And a benchmark in bringing us to the dangerous place we find ourselves today is undoubtedly Senator Schumer thundering in front of the Supreme Court in 2020, on the day of oral argument in another abortion case, "I want to tell you, Gorsuch! I want to tell you, Kavanaugh! You have released the whirlwind, and you will pay the price! You won’t know what hit you if you go forward with these awful decisions."

Yet another abortion case prompted a demonstration outside Justice Kavanaugh’s house last September, led by ShutDownDC.

Democrats control both houses of Congress and the presidency. It is long past time for these leaders to stop giving pro-abortion radicals a pass for their miscreancy—and indeed for fanning the literal flames that these threat-laden protests predictably brought. 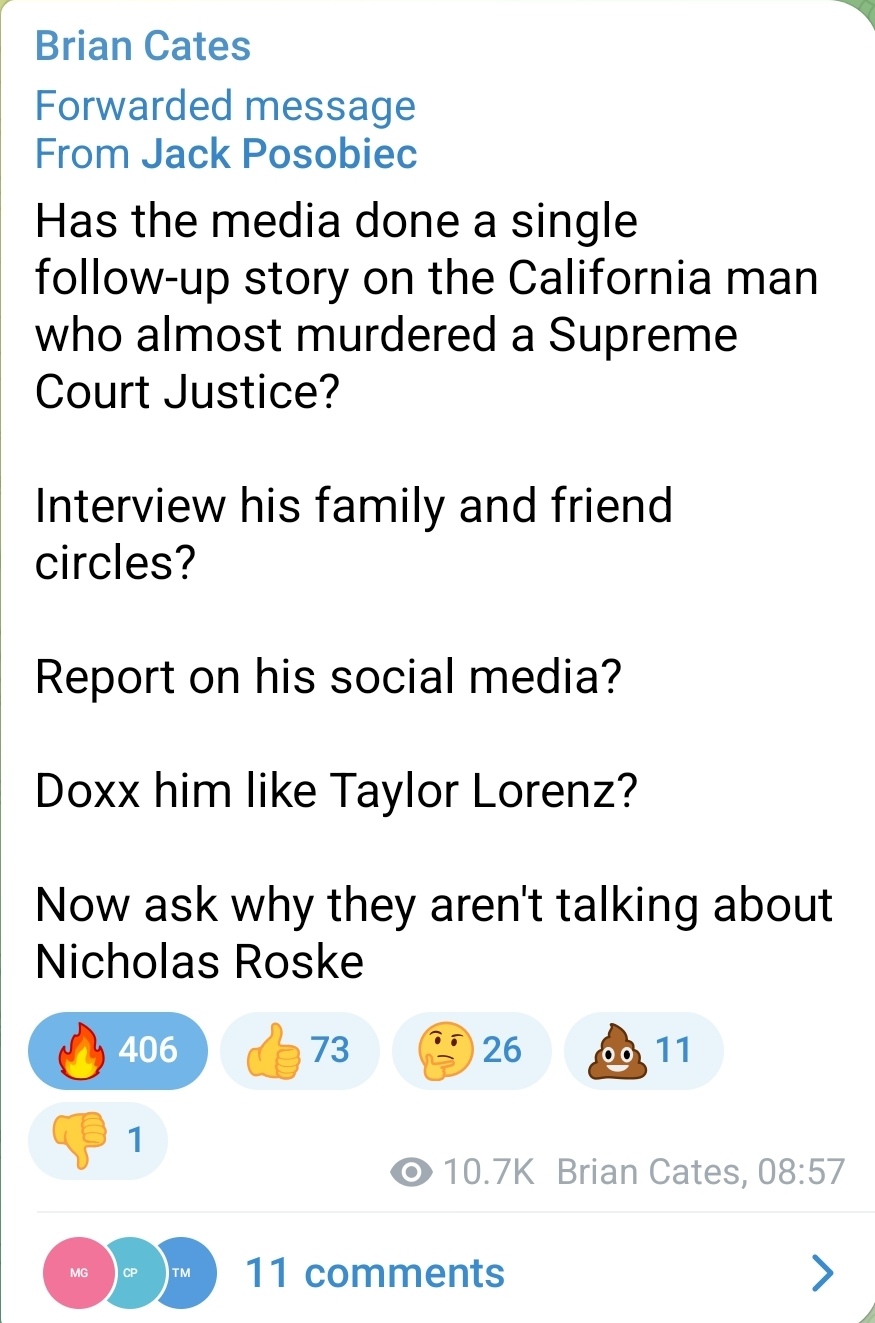 The Left can't justify killing innocent babies or bombing places that try to rescue them. They eagerly do both though. What's the solution?

The Golden rule. Do unto others as they do unto you.
You must log in or register to reply here.

Like the Black Lives Matter protests, Jane's Revenge is getting a pass on their pro-baby killing vandalism tour.

'The left has really turned anti-democratic'

Pedo-Joe is truly a disgrace, let's be better than him

The 1/6 committee is getting extra security, they say tensions are rising, but they block extra security after an assassination attempt of a justice?