The worst president in history and pedophile, Pedo-Joe, supported it. Now with midterms coming up and crime out of control, of course the liar and child molester is preaching "fund the police."

Leftists created this mess and are destroying our country

Bleaters bleat their approval by voting for these America haters

The movement to "defund the police" has created a dangerous "ripple effect" that is being felt in departments large and small, making communities across the U.S. less safe, law enforcement veterans say.

The Philadelphia Police Department currently operates at around 20% below its targeted staffing level. In Portland, Oregon — where hostilities toward law enforcement are particularly high — the city’s police department has lost more than 230 sworn officers through retirements or resignations since 2020. In Indiana, the Noblesville Police Department, operating with around 100 officers, is seeing fewer and fewer applications, according to local media.

Law enforcement veterans who spoke to Fox News Digital said short staffing has led to burnout among officers and morale is at an all-time low.

"I talk to law enforcement leaders on a daily basis. And in today’s world, their No. 1 problem is staffing," retired Forth Worth Police Chief Jeff Halstead told Fox News. "And what you hear is the same drum being beaten: How are we going get ourselves through this? And what steps are we going to take to get our staffing back?"

But the problem of understaffing goes well beyond police departments. Such shortages have an immediate impact on a police department’s ability to serve communities. With officers spread thin, residents can expect longer response times. And in some cities, a stolen car or a house break-in can take days to get an officer on the scene. In other cases, some departments have simply stopped taking some reports altogether.

"The national goal for your highest-level priority call and policing was to respond and be on location within five minutes. That was a national goal. It's been the national goal for decades. And the majority of major city police departments were accomplishing that goal within three and a half to about four minutes and 45 seconds," Halstead said. "Today, I don't know of any of them that are aggressively meeting that national standard."

"With public safety and law enforcement, you can't just turn the lights off and go home," Rasche said. "So, what happens is you have to be creative and find different ways to provide the services you need. And yes, things are very delayed during this particular period, especially."

Consequently, Rasche said, officers do not have enough time for training or to recharge — both of which are highly important to better serve their communities.

"Your officers cannot take the time to be doing the training they need to be doing and have the time off," Rasche said. "They need to recharge to come back so that they are 100% when they put that badge back on their chest and come back to work."

Rasche said these problems will burden police chiefs to "be that cheerleader and be a watchdog over his officers to make sure that the department is running smoothly."

"There’s a ripple effect that right now is really dangerous," he said.

Halstead, who has more than 30 years of experience in law enforcement, said morale within police departments is the lowest he’s ever seen in this profession. The causes, he said, boil down to two primary reasons: they feel their profession has been demonized, and they are concerned about being indicted criminally.

On the latter point, Halstead noted, some officers have been indicted on crimes when they handled a call for service in exactly the manner for which they were trained.

"Because of specific optics of the use of force incident … they're now being indicted. So, many police officers, especially in your high-risk, high-crime suppression units, they are not getting nearly as aggressive as they used to be," Halstead said. "And that is one of the primary drivers of a massive increase in violent crime."

Rasche argued that only a silent minority of the country is driving a negative narrative of police officers and, consequently, officers "don’t want to show up in a courtroom being indicted and (have) the rest of their life being crushed over something that they really didn’t do wrong."

He added that many community leaders are implementing radical measures that are at odds with what citizens actually want.

"It's glaring today in these communities where they're trying to do things that have never been done before that they are obviously not working," Rasche said. "And I think that you're starting to see the public step up and say, 'Look, we're not going to take this anymore. We're not ... going to live in a crime-ridden community. We are going to support the police. We want the police funded, and we are going to be there for police to support them because we need them.'"

Are you in this photo of New York's bleaters @NYC_Eer? 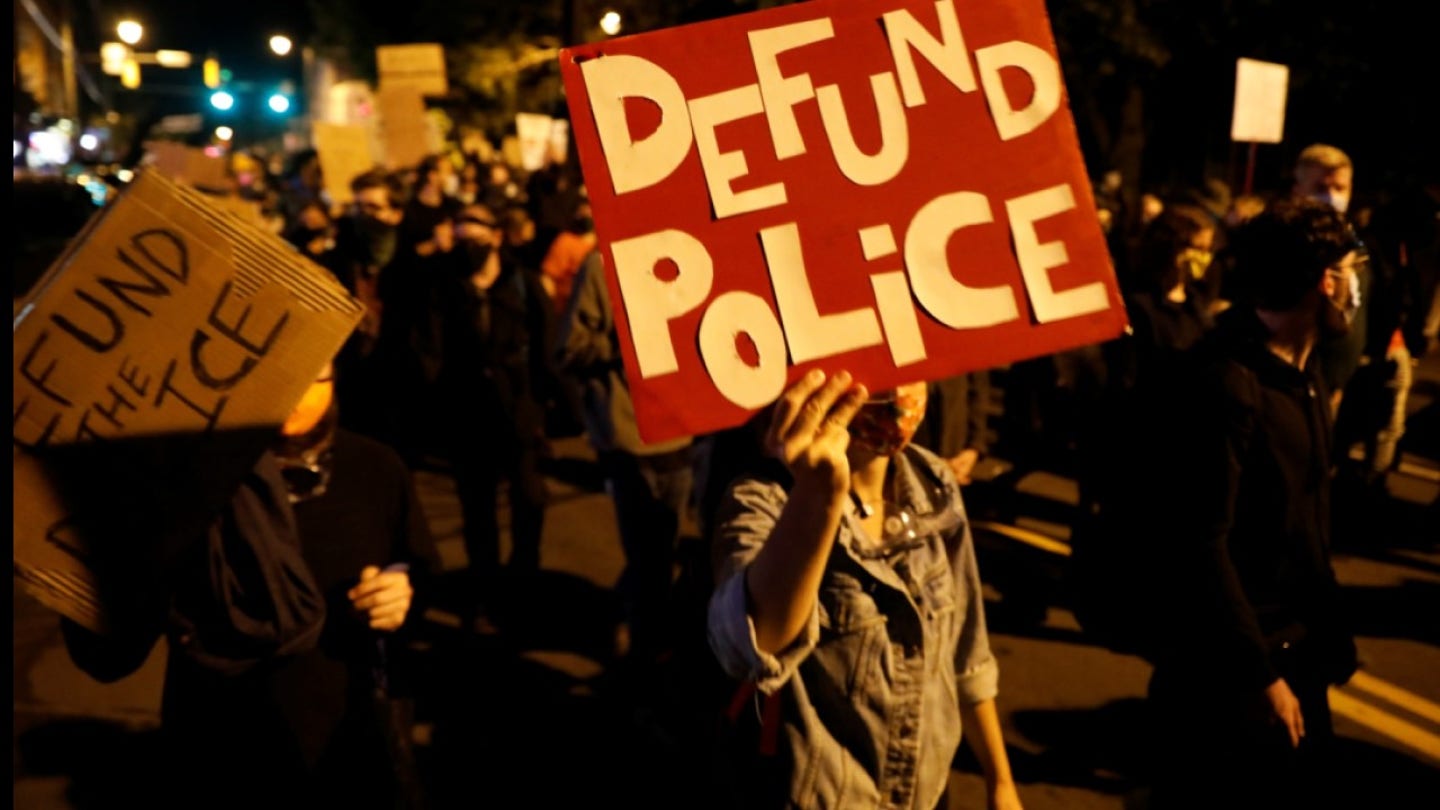 30CAT said:
The worst president in history and pedophile, Pedo-Joe, supported it. Now with midterms coming up and crime out of control, of course the liar and child molester is preaching "fund the police."

Leftists created this mess and are destroying our country

Bleaters bleat their approval by voting for these America haters

The movement to "defund the police" has created a dangerous "ripple effect" that is being felt in departments large and small, making communities across the U.S. less safe, law enforcement veterans say.
"

Are you in this photo of New York's bleaters @NYC_Eer?

Demonstrators hold signs reading "Defund the police" during a protest in Rochester, New York, on Sept. 6, 2020.​
Click to expand...

The same ploy he has used for nearly 50 years in office. Use his vocal support for an issue until that issue proves not to be popular with most voters, then change his support claiming his political opponent was the issue supporter.... continues today...
You must log in or register to reply here.