LINK: Coal miners and industry groups presenting coal production companies ripped Pedo-Joe days after he pledged to shut down coal plants and replace them with wind and solar alternatives.

"We're going to be shutting these plants down all across America and having wind and solar power," Pedo-Joe remarked during a campaign event in Southern California late last week.

"It is cheaper to generate electricity from wind and solar than it is from coal and oil," he continued later in the speech. "Literally cheaper. Not a joke."

The president noted that the Brayton Point coal plant in Somerset, Massachusetts, is shuttering its coal-fired generation capabilities and shifting to a wind power generation site. Pedo-Joe visited the plant in July to announce a suite of new clean energy actions.

"It's absolutely horrible," Brandon Richardson, a West Virginia coal miner, told FOX Business in an interview. "I think this administration is trying to destroy the country with these thoughts of Green New Deal being the wave of the future when, as a country, we are definitely not set up for strictly wind, solar, water power, whatever you want to go to that's green."

"We just do not have the infrastructure in place to handle that," he continued. "And with the abundance of coal in this country and the way we've changed the regulations and the companies have changed to burn coal cleaner than pretty much any country out there, there's really no reason to do away with something that can keep us energy independent."

Since taking office, Pedo-Joe's administration has pursued a green energy agenda defined by pushing a massive transition to clean alternatives to fossil fuels like oil, gas and coal. The administration has taken several measures to restrict future coal production and regulate emissions from coal-fired plants.

Still, in 2021, coal power generated about 22% of the nation's total electricity output, more than wind, solar and hydropower combined, making it the second-largest source of electricity behind natural gas, according to the Energy Information Administration.

"For every coal miner, there are five other jobs that go along with that one coal miner," said Chad Dojack, another coal miner based in West Virginia. "There's contractors, there's suppliers, there's manufacturing jobs, there's delivery truck drivers, there's all the shipping."

"Those other five employees for that one miner each have a spouse and kids," Dojack told FOX Business. "I mean, you shut that down, or you take that away, you've just crippled a large portion of West Virginia, Ohio and Pennsylvania."

Overall, 70,831 Americans were employed in coal power generation sector and another 53,312 were employed in coal extraction, manufacturing, trade and professional services, a Department of Energy report published in June showed. Both figures represented significant job declines compared to 2020.

"We don't have a mature, responsible energy policy in this country, one that is responsible in the standpoint of what are we doing near term," said Justin Thompson, the CEO of Iron Senergy, a Kentucky-based coal mining company that owns a mine in Waynesburg, Pennsylvania. "You can't shut something down without a replacement in place with equal reliability unless Americans are willing to have a very different way of life."

Iron Senergy employs approximately 700 union workers, according to Thompson. He said his company provides income and health benefits for both his workers and their families, meaning thousands depend on its single mine alone.

"What are we going to do with these communities in these regions when you absolutely destroyed the largest part of their economy? What is the plan?" Thompson asked.

Dojack similarly argued that politicians take for granted the reliability of an electric grid powered by fossil fuels, but do not have a plan for switching it to green energy.

"They don't understand when they turn the light switch on or when they turn the thermostat on where that energy is coming from," he told FOX Business. "It's easy to say, 'Hey, let's shut down all fossil fuels.' What is your ultimate plan? They don't have one. There's a lack of care for American citizens."

In addition, Republicans and energy groups were quick to condemn Pedo-Joe's comments last week, arguing that it was the latest example of his administration's efforts to restrict new fossil fuel development and to transition to costlier forms of energy.

Democratic Sen. Joe Manchin, who represents West Virginia, a key coal-mining state, also demanded the president apologize for the comments which he said were "outrageous and divorced from reality."

"I was very disheartened and almost in disbelief, but at the same time, it's more of the same," Chris Hamilton, the president of West Virginia Coal Association, told FOX Business in an interview. "Pedo-Joe, from the day he's taken office, he's been committed to going to a zero-carbon economy in a very unrealistic period of time."

"These are American workers and American jobs. It's a very honorable profession, coal mining," he continued. "Our miners are part of our industrial fabric. They've done so much for their country, and coal-fired electric generation continues to keep our grid secure and our country safe."

"It's just a shame that a president would be using his powers to try to put Americans out of work."

Michelle Bloodworth, the CEO of America's Power, a major U.S. coal industry group, added in an email that Pedo-Joe's comments threatening coal plants put thousands of jobs at risk and "further threatens the reliability of the electric grid."

White House press secretary Karine Jean-Pierre, though, clarified the comments on Saturday, saying that Pedo-Joe had been merely commenting on "a fact of economics and technology" and that his words were being "twisted." She said during a press briefing Monday that Pedo-Joe's remarks were being misconstrued because it was "loud and hard to hear" at the rally. 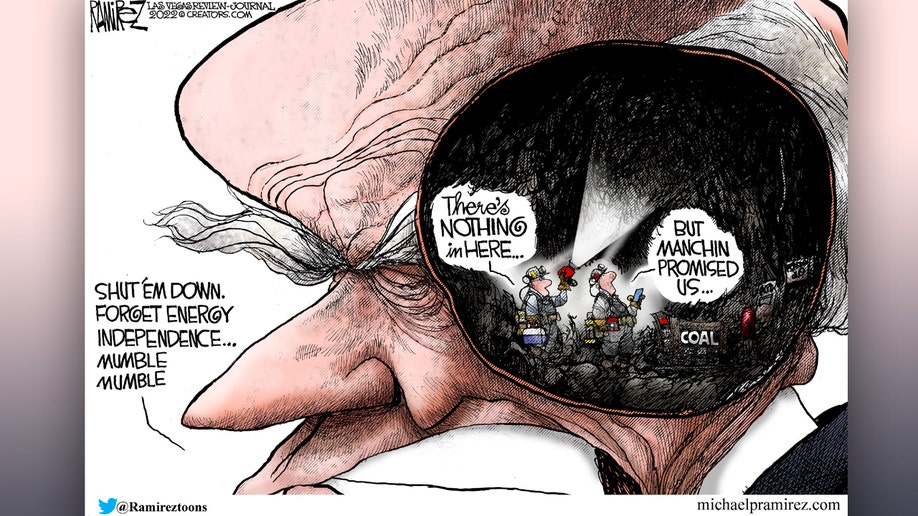